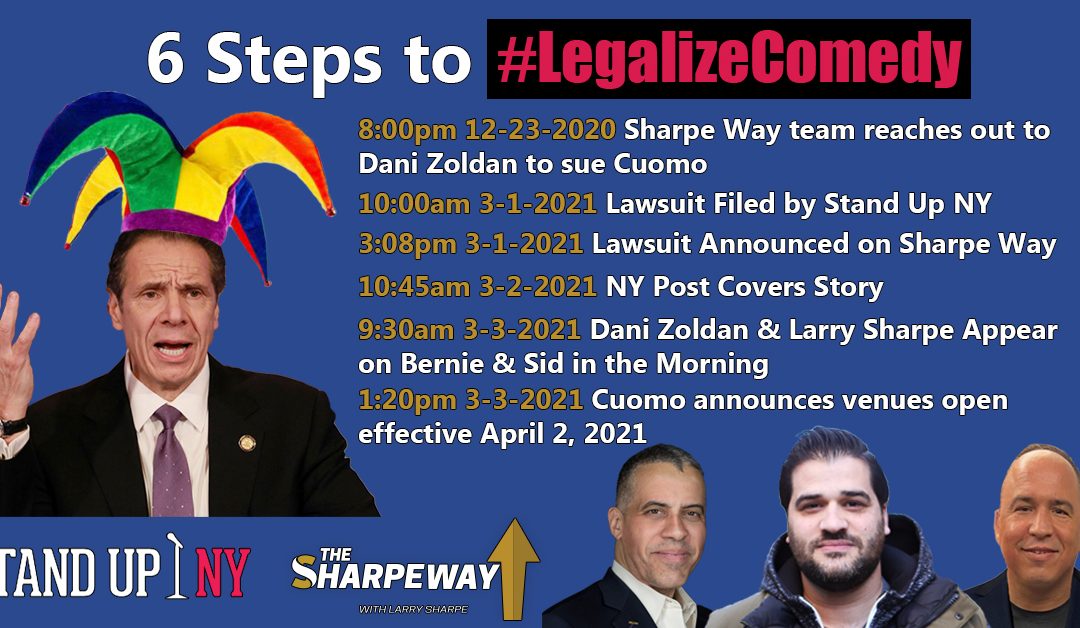 The lawsuit that Larry Sharpe of The Sharpe Way organized with Dani Zoldan of Stand Up NY against Governor Cuomo proved successful. Two days after Attorney James Mermigis, the “Anti-Shutdown Lawyer” brought suit, Cuomo announced that entertainment venues including comedy clubs would be able to reopen on April 2 at 33% capacity.

Cuomo’s announcement to unshutter entertainment venues came just hours after an appearance by Larry Sharpe and Dani Zoldan on Bernie and Sid in the Morning.

Sharpe believes that we can defeat Cuomo again, in court if not at the ballot box. Cuomo has done enormous harm to people and small businesses over the last year, and politicians are not holding him accountable. Cuomo’s bad policies resulted in a 40% surge in bankruptcies since the lockdown began, with over 6,000 New York businesses shut down by September 2020, according to Bloomberg. His incompetence also resulted in thousands of deaths that the Cuomo Administration under-reported by 50% as of January 19, according to the Associated Press.

Larry Sharpe ran for governor in 2018 because he was fed up with the poor leadership that is failing New York State. He continues to help the people of New York despite being a plain citizen who does not hold public office. People are already using nicknames like “Liberator Larry” to describe the man who is taking on Cuomo one lawsuit at a time.