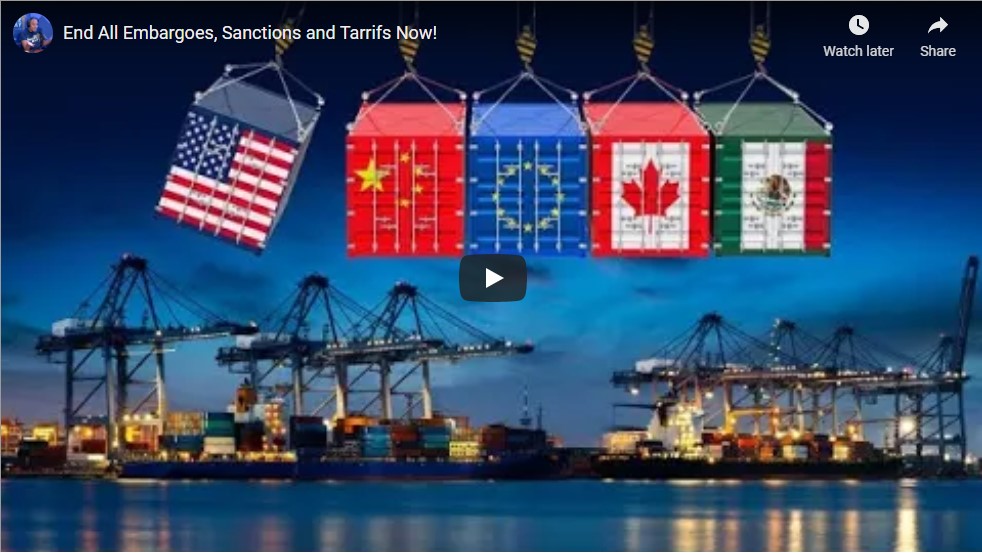 As President Biden ends military aid to Saudi Arabia in their war against Yemen, now is the perfect time to end ALL US sanctions and embargoes.

“Ending all sanctions and embargoes now IS an American First Strategy.  Our culture of freedom is far more powerful than any bomb we could ever drop.”

New York, New York, February 8th, 2021: President Biden has an amazing window of opportunity. Larry Sharpe, host of The Sharpe Way and Libertarian Party Mises Caucus Advisory Board member addressed Joe Biden’s stated position on peace in Yemen as the beginning of a plan to end all sanctions, worldwide. As President Biden calls for the deescalation of war in Yemen, Iran says the time is right to talk.

“The Biden administration should create a plan to remove ALL sanctions and ALL embargos within the next 6 months. This would immediately spur economic hope and growth in our nation and abroad. In addition, it would move our enemies closer to becoming our friends, making the world safer.”

Economic sanctions against Russia have not worked to foment change. Violence from the Putin regime is escalating despite economic pressure on Russian civilians. An end to sanctions and punitive actions would increase stability in the region and make cooperation more likely, according to Sharpe.

“The sanctions have not worked to curb the Putin regime, so let internal pressures do the job for us, while we all grow.”

Government shutdowns of sectors of the economy in response to the Coronavirus pandemic have ravaged our supply chain. Basic necessities from toilet paper to glass have been in short supply, slowing the production of vital supplies. The production and distribution of COVID-19 vaccines and other medications may be hampered, with great costs to health and human life.

Doctors agree that access to vaccines saves lives, particularly among older demographics and low income families. Glass and reagent shortages due to government mandates that impact the supply chain can result in vaccine shortages.

The fastest way to bring relief is to end the lockdowns, tariffs, and all other impediments to free trade, according to Sharpe, who considers the world to be in crisis, where human rights and suffering should override politics. It’s time to actually be righteous and help all people to be better and advance towards life, liberty and the pursuit of happiness, according to Sharpe.

Larry Sharpe calls on President Joe Biden and his administration to lead by example by ending all the trade wars and pursuing growth, safety and goodwill on the international stage.

About The Sharpe Way: The Sharpe Way Show was founded by Larry Sharpe, the 2018 Libertarian Party candidate for Governor of New York to help heal the nation’s political divide between liberals and conservatives.